Dimitrios Pogkas is a Journalist and Startups Editor at Emea.gr portal. Since Mozaik is an enterprise that uses the new online media and keeps always investing on innovative ideas, we interviewed Mr Pogkas on the new Internet investments and startups in Europe and especially in Greece.
He kindly provided us with some elements about the expansion of online commerce in Greece, while it is reeling under economic crisis.

Mozaik: How is the e-commerce being formed in Greece?

Dimitrios Pogkas: E-commerce has been around for many years in Greece (just remember the development of the first e-shops in the late 90s), however in recent years it has been enjoying a rapid growth.

As calculated by the Laboratory of E-Commerce of the Economic University of Athens, the overall turnover of e-commerce reached the amount of 2.9 billion euros in 2012, while there were 1.9 million purchases performed by Greeks during the same year. The key performance indicators of the online market recorded an increase of some 30% compared to 2011, whereas there was a 50% increase in overall purchasing compared to 2011. 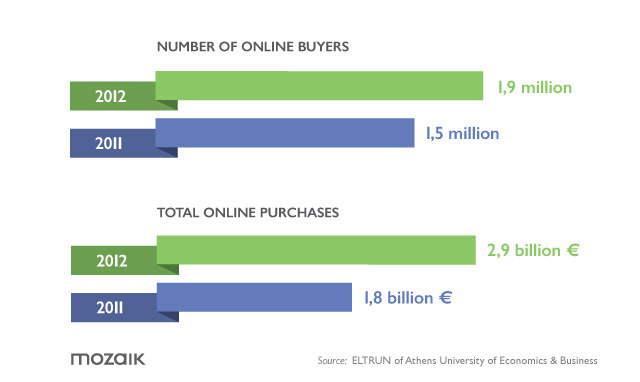 Moreover, significant rates of change in the behaviour of Greek online consumers are recorded, as they move from the “traditional” cash on delivery method of payment to e-transactions with the use of credit and debit cards, as well as “e-wallet” applications. 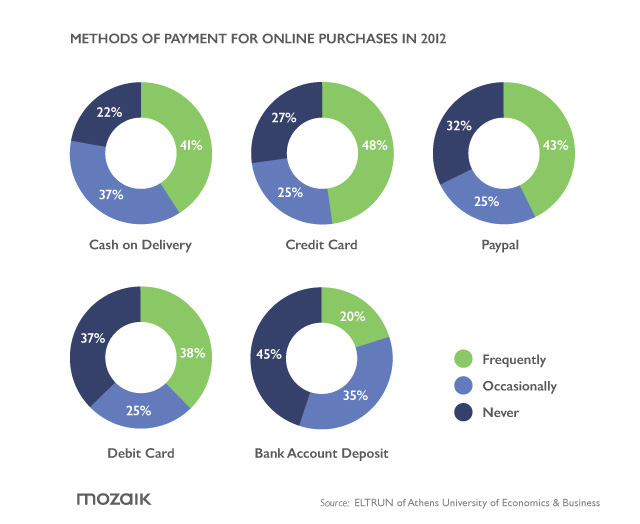 According to the same Laboratory, both e-entrepreneurship and e-commerce are expected to record an even bigger growth within the next five years, increasing their economic “footprint” by 2-3 billion euros. Finally, it is worth mentioning a recent study of Google and of the Foundation of Economic and Industrial Research which indicated that the Internet contributed the sum of 2.7 billion euros to the Greek market in 2011 (1.2% of Greece’s GDP), whereas this figure is expected to grow by 6% annually, and reach the amount of 3.6 billion euros.

From these figures it is evident that nowadays both e-commerce and e-entrepreneurship are currently on the rise in Greece while becoming a “keystone” both for the development of the Greek economy and the enterprises especially during the phenomenal economic crisis of the last 40 years.

All this can make us hope that both consumers and enterprises will develop a culture which will allow e-entrepreneurship to further increase its contribution to the national economy as well as to reach the levels of the EU.

Mozaik: What is the position of Greek e-entrepreneurship among the other EU countries?

Dimitrios Pogkas: Based again on the aforementioned studies, we can see that Greece, despite the progress of recent years, lacks behind the other EU countries to a great extent. The aforesaid Laboratory estimates that, according to the EU average, there should be 4 million transactions and a turnover of 5 billion euros annually in Greece. On the other hand, Greece was found in the last ranking places of the EU regarding the percentage of business access to the Internet, surpassing only Romania, Bulgaria, Hungary, Cyprus and Latvia.

Despite the late increase and the positive estimations for the next two years, we can see that Greece cannot even reach the average e-entrepreneurship in the EU (an area that is not even considered a pioneer of e-commerce). Apart from the development of a culture for the use of electronic means in trade and the consumer habits that we have already mentioned, it is left on institutional hands to plan and apply those policies that will release the dynamics that the Internet and the e-entrepreneurship may possess for the development of Greek corporations and consequently the Greek economy. 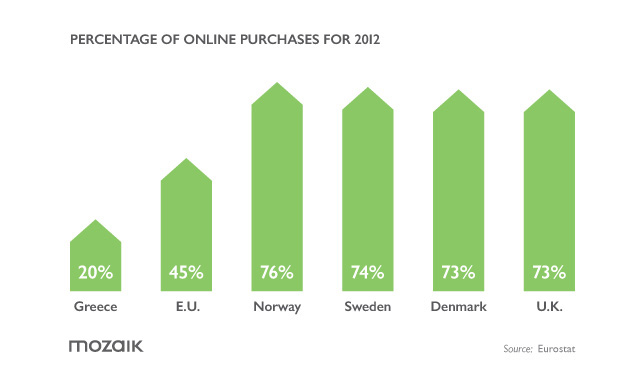 Mozaik: Startups are not a trend, but mobility is evident. Will there be a progress? Will we see any other “success stories” like BugSense?

Dimitrios Pogkas: The concept of startups has always been considered in the Greek reality. Let’s not forget that small-and-medium-sized enterprises (SMEs) along with family businesses constitute 99,9% of all Greek enterprises in Greece while forming 85,6% of the job positions. What has changed is primarily the name, namely the introduction of the term “startup”, following the American and European trend, and secondly the promotion given to this new entrepreneurship “wave”, since it is the only sector offering positive news, while counterbalancing the crisis’ “depression” and perhaps the exculpation of entrepreneurship.

Mobility in creating startup companies is generated by the crisis, which closes the “doors” towards the public sector and reduces the salaries or minimizes the number of work positions in the private sector. Hence, lots of people, not only youngsters as many believe, find an alternative in creating their own enterprise or in the implementation of an idea, since now they have both the free time and the motivation. The fact that a big part of this startup activity concentrates on “mild” technology (Internet and mobile applications) as well as on the food sector is due to the reason that the first is a sector that provides great convenience in creating a product that can be sold through a computer or a mobile device everywhere in the world, and the second is an industry where Greece has a rich tradition that nowadays has reached a more innovative and creative level.

Indeed, the takeover of BugSense agreement from Splunk, a company with a market value of 6 billion dollars, is a success story for a startup coming from Greece. It proved that two young and talented people managed to create an enterprise based on a good technological product, an enterprise that started with little financing from abroad, expanded with the hiring of ten more young and talented people and within three-year’s time is was sold to an American multinational “giant” of technology, while these two people undertook the management of its mobile network.

Generally, it seems early to talk about success stories within the Greek startup reality of the last two or three years. We could say that every new enterprise is successful when it grows and creates new working places that provide an income to talented people during the crisis. We should not forget that a startup is an enterprise, so its success depends on whether it has clients, income and, at the end of the day, profits, and not on whether it is famous, has fans and access to investing circles.

Every success depends on how seriously this “ecosystem” will be developed, and whether it will create a culture and a market that will continue to exist even after the three years of investments from the funds jointly created with the European funds, or even after the end of the economic crisis.

Dimitrios Pogkas: Surely at this point of time as we previously mentioned “dynamic” and the relevant share of (over) exposure relate to enterprises dealing with the “mild technology” sector (i.e., mobile and web application development, specialised social media, e-shops or e-commerce applications, mobile and Internet marketing, digital agencies etc.).

This happens because, as throughout the rest of the world, any activity related to the Internet costs much less and takes very less infrastructure than any other activity. On the other hand, in Greece there are a great number of human resources and enterprises in the sector of high technology. Companies in the field of nanotechnology, microelectronics, mechanical vision, and robotics transfer abroad and attract investments as well as collaborations. Perhaps, they are not well-known to the media and the public; however, we need to turn our interest to them in order to further promote them, since these sectors surely constitute the future of humanity.

Cycladia, Mozaik’s startup invests in quality, new media, innovative ideas, time and, above all, people, while it still remains the most efficient online place for your vacations in Greece. With our sight turned to the future, we turn it into present, while learning from the values that experience has granted us. Following the best that new media have to offer, Cycladia took part at Travel @ Google Forum 2013, featuring four (4) Greek startups related to travel, something that constitutes a great acknowledgment of its work done so far as well as the one that is to be done in the future.