Piraeus Bank Group, having a leading role in the Greek market and a strong international presence, offers a wide range of financial products and services. Being the number one bank in Greece it has taken part in the restructuring of the Greek Bank System, as one of the most important pillars in the bank field, by innovating and offering solutions and outlets, in order for the economy and businesses to regain their pace and to create new sustainable growth paths. At the same time, it has the know-how, experience and determination to effectively address today’s challenges and to ensure that it meets the highest standards of operational and corporate governance.

The purpose of Piraeus Bank is to be a pillar of stability for the Greek economy, to fuel growth and support innovation; its impact to be positive and lasting, with benefits for its customers, employees, shareholders and society at large, fully reflecting the bank’s values which are to create value in all they do, to challenge frontiers, to enthuse their customers and to build relationships of trust. That is the reason why the Management of the Bank decided to pursuit a new corporate culture while creating a modern work environment that promotes open communication, high performance and personal growth. Piraeus Bank assigned Mozaik to communicate among the Bank’s employees its mission, vision and purpose and bring forward its new corporate culture and values on the occasion of the upcoming Values Festival.

After thoroughly studying Piraeus Bank’s new corporate culture, values, mission and purpose, Mozaik began by setting the appropriate tone and communication language for the entire campaign. Then it defined and visualized the brand identity of the Values Festival that was later spread between all advertising material, script, slogan and corporate video, maintaining consistency throughout, always in line with the new value-DNA of Piraeus Bank. 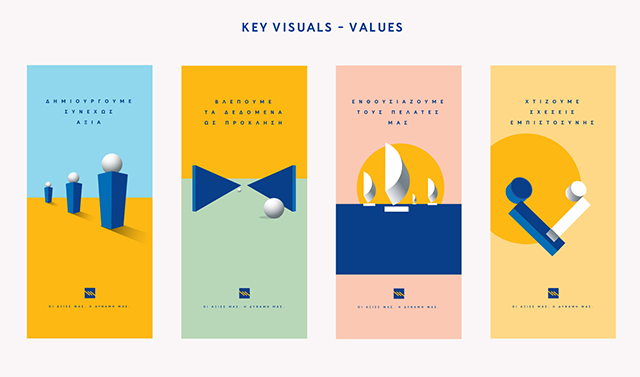 Each value was communicated in a different, modern, powerful and abstract way, allowing employees to give their own interpretation to each value symbolism, while the graphics branding composition supported the Festival’s core message with the motto “Our values, our strength”.

Visuals were inspired by different art movements, deploying elements of supremacism, surrealism and modernism coming together to create a universe of symbols expressing the fundamental values of Piraeus Bank. 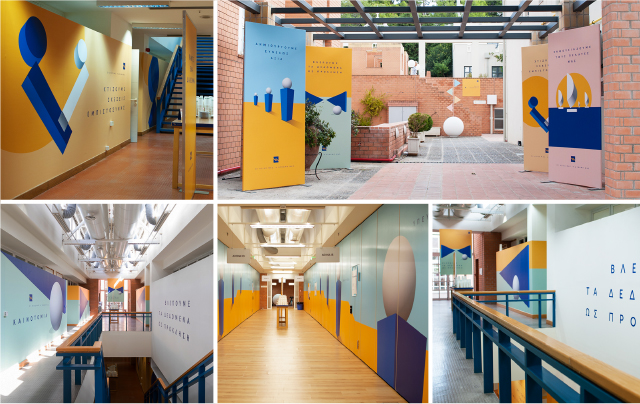 Each value was represented by a unique symbol, possessing a strong, chromatic identity based on the basic colors, the blue and yellow of Piraeus Bank, as well as four supportive colors – baby blue, soft green, powder pink and light yellow.

The main visuals had to be incorporated in the venues of the Values Festival with 3D constructions featuring their own color code, in the form of wallpapers, sculptural props, navigation signs, value-based t-shirts and slogan installations. Completing the inspirational and festive experience Mozaik delivered also the festival’s campaign video, referencing Greece and the optimism that lies within the dreamy and yet so familiar scenes of the sea’s eternal blue and the sky’s yellow-golden rays of sun – color motifs that can be found in the brand identity of Piraeus Bank and the Greek landscape alike.