Continuing its creative collaboration with Max Stores, Mozaik and partner Cinecreed Productions signed the concept, creation and implementation of their Christmas campaign for 2021 for all digital channels. 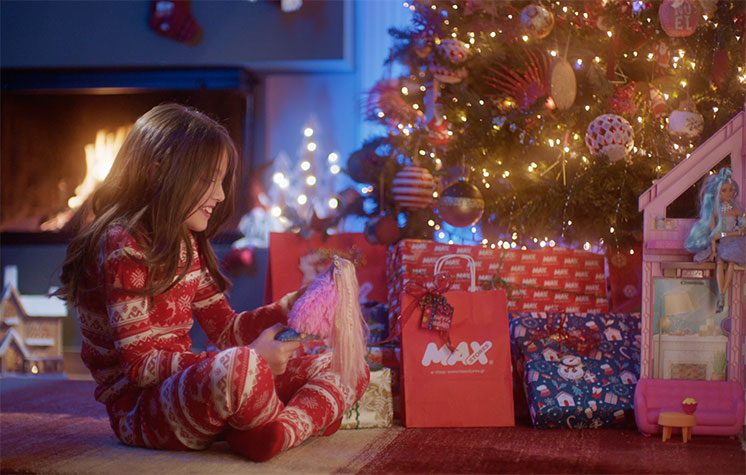 The challenge was to communicate that Christmas is actually a feeling, a feeling that can be heightened by MAX Stores Deco. With a great emphasis on sensations and emotions and on how the one strengthens the other, the movie was composed of feelings such as love, affection, joy, carefreeness, laughter and childishness. At the core of the movie, the 5 senses area triggered by the festive atmosphere, the warmth of the lights, the taste from a kiss, the affection of a touch and the sweet smell of desserts. The movie is defined by a nonlinear structure between scenes and slow motion highlighting the time difference. The deco is underlined in the long shots while the close ups bring out the actors’ emotions. The film’s purpose was to communicate the warm Christmas feeling one can experience at home with the help of Max Stores Deco.

In the same Christmas spirit, two more TV commercials were produced to promote Max Stores’ Books & Toys and more specifically Barbie & Hot Wheels. The challenge here was to communicate how a book can inspire kids to play. Signed by the slogan “Imagination comes into Play” the movie actually shows how a kid’s imagination can be triggered from a book and come into play. 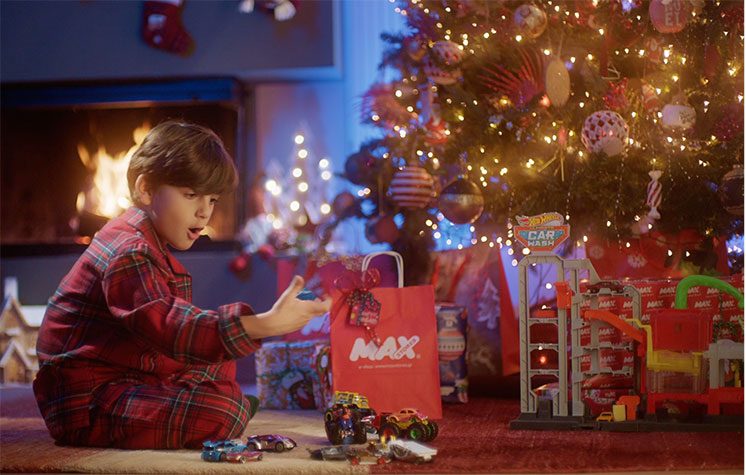 Set into the microcosm of a child’s world, the kid is still trying to figure out what to ask Santa for Christmas with no luck but as soon as he finishes his favorite book, his imagination is triggered, and starry-eyed with excitement he is struck with the idea of the perfect present. A Barbie House for the girl and a Hot Wheels action set for the boy. The actors’ reactions feel as though they want to shout in a whisper, as if they are trying to keep quiet not to wake the rest in the house but with an enthusiasm that can’t be tamed. Besides the establishment of a long shot showing the entire room with a wide-angle lens to create a great impression of the situation the rest of the cinematography is based on close ups to catch the actors’ genuine reactions and enthusiasm. The fast-cutting shots along with the sound effects add an extra twist and modern dimension to the movies.

The greatest challenge in all three movies was to somehow advertise the products of MAX Stores without ever showing or mentioning them for broadcasts before 22:00. Therefore, two versions of each movie were created, one for after 22:00 showcasing the products and one for before 10 creatively suggesting the products.

After long hours of script writing, editing, creative direction, selecting locations and constructing sets, casting, styling, lights, cameras, cuts and action, many talented people on the film set and a stunning professional video montage we were proud to see our new TV commercials on air. Check them out!

Megas Yeeros was founded in 2007 with the vision to…


Continuing its successful cooperation with established clients in the construction…


MOZAIK WEARS THE BRONZE COLOR OF SUCCESS AT ERMIS AWARDS